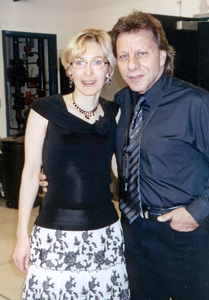 Richie Cannata, the Grammy award-winning saxophonist, was inducted into the Long Island Music Hall of Fame along with the other original members of The Billy Joel Band at the LIHoF's 2014 Induction Gala on October 23rd at The Paramount in Huntington.

Along with being The Bitter End’s weekly Monday night jams host and music director for Latin singing star (and former NY Yankee) Bernie Williams, Richie is co-owner of Cove City Sound Studios in Glen Cove, L.I. with his son Eren. Its roster includes Billy Joel, Celine Dion, Ray Charles, and a wide range of great musicians from around the world.

I recorded four of my CDs at Cove City with the late remarkable recording engineer and producer Brian Harding. Richie joined me on my crossover album Changing the Pace (2003) and spun improvised magic from his saxophone alongside the piano on the CD's second track -making Steven Rosenhaus’ very cool “Two True Blues" even cooler.

Congratulations to Richie and The Billy Joel Band!