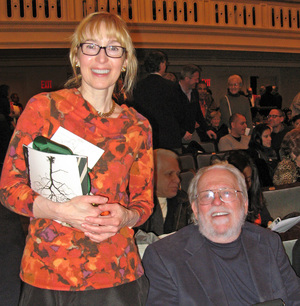 As a complete surprise, Mr. Schickele and I then performed his wonderful "Little Suite for Summer" for four-hands, composed as present for his son Matthew's 8th birthday. The celebration continued with John Schaefer's presentation of the award to Mr. Schickele. Host of WNYC's Soundcheck and New Sounds, John Schaefer paid tribute to the composer, his remarkable gifts to the world of classical music and how he changed and enriched the musical landscape of our lives.

To read more about this special evening, you are invited to read:

To learn more about the Classical Recording Foundation: classicalmusicfoundation.org