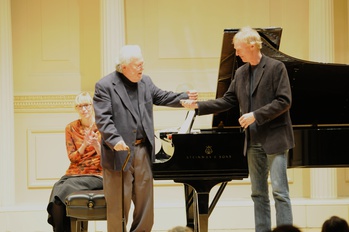 Peter Schickele is a national treasure, one of our country's most creative and versatile composers. His birthday today shares the extra celebration of 2015 being the 50th anniversary of the first P.D.Q. Bach concert- the composer having been "discovered" by Professor Peter Schickele. It took place at New York's Town Hall on April 24, 1965.

Peter Schickele's own compositions number over 100: works for orchestra (including his Symphony No. 1 "Songlines" commissioned by the National Symphony), choral, chamber and solo instrumental, vocal, movies and television. He has received 5 Grammy Awards, including P.D.Q. Bach: 1712 Overture and Other Musical Assaults. His nationally acclaimed NPR program Schickele Mix aired for 15 years.
He arranged musical segments for Disney's Fantasia 2000 and created the musical score for the film version of Maurice Sendak's children's classic Where the Wild Things Are. Peter Schickele is recognized as one of the great musical satirists in creating P.D.Q. Bach. Vanguard released eleven albums of P.D.Q. Bach (the fabled genius's works); Telarc has released six.

Peter Schickele is a master of refined, streamlined composition, contouring simple musical lines brilliantly and refreshing traditional melodies, transforming them anew-while often blending his love of folk tunes and popular music, which he brings to the contemporary classical realm with finesse and sensitivity.
Peter Schickele and P.D.Q. Bach have changed the world's musical landscape
and they continue to enlighten it for musicians and music lovers alike!