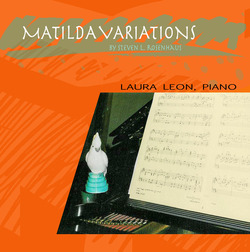 In December 2000, Laura asked New York composer Steven Rosenhaus to write a solo piano work based on Waltzing Matilda in honor of Australia for a concert she and Melbournian soprano Lesley Pryde were invited to give at the New York Australian Consulate.

Rosenhaus' work embraces the song's timeless spirit, cleverly weaving its way through an inventive group of variations. Delightfully subtle references to many great piano works are made throughout the piece-from a roster of composers that includes Bach, Mozart, Beethoven and Chopin. Along the way, Matilda Variations take an unexpected turn--with a tango. Two variations-including the tango-can be heard right here.

The cover art was designed by illustrator and photographer Karen Leon. Her Australian-spirited lines and colors surround the Steinway Piano photo of Rosenhaus' score and an Australian ceramic cockatoo-lent by Dr. Peter Green.

It is also the soundtrack for Broken Tail Production's 2013 film of the same name, capturing the spirit of Australia through paintings by the noted Australian artist Ian Banksmith.

A copy of the recording is in the Australian National Film and Sound Archive in Canberra--which collects, preserves and provides access to Australia's historic and contemporary moving image and recorded sound culture.