Blessings of Beauty: A Classic Collection of Judaic Gems 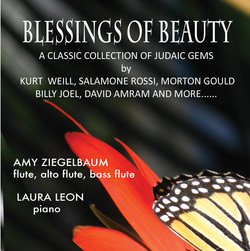 Blessings of Beauty takes the listener on a exquisite journey of Jewish music-old and new. A unique compliation of instrumental settings of songs and choral works by renowned and beloved composers, it brings together Broadway and traditional Yiddish folk tunes, liturgical and flamenco-inspired Ladino song settings, music from a Grammy and Emmy award-winning television score and the elegance of the Renaissance.

Its beauty and atmosphere transports the listener -- from Billy Joel's heartfelt Lullabye (Goodnight, My Angel) and the tender, stirring Yiddish treasure Oyfn Priptichik, to Kurt Weill's bluesy Kiddush, the eloquent Benediction by Italian Renaissance composer Salamone Rossi and the inspirational, reflective In My Own Lifetime from The Rothschilds by Jerry Bock, the acclaimed American Broadway composer of Fiddler on the Roof.

The CD has been included in the soundtracks for the Emmy award-winning documentary The Hidden Life: The Story of the Sisters of St. Mary--broadcast on PBS--and Walking God's Paths, co-produced by the National Council of Synagogues, The United States Conference of Catholic Bishops and Boston College.


Binyumen Schaechter (a.k.a. Ben)--Conductor, Composer, Pianist, and Executive Producer/Musical Director/Arranger for the film When Our Bubbas and Zeydas Were Young: The Schaechter Sisters on Stage, surprised us with a listening and wrote about Blessings of Beauty on January 3, 2012:

"Today I heard your CD and it's terrific! The flutist, Amy Ziegelbaum, has a beautiful sound and technique and you have an equally excellent technique, with a wonderful arranger's ear, providing fresh approaches harmonically and often melodically--making each piece sound quite unlike the versions of the respective pieces as we've heard them before. It's high level, beginning to end. Yasher-koyekh!"