Masha's Arigato: A Tribute to Sugihara and the people of Japan

A piano work inspired by the true story of Masha, a girl saved by the heroic Japanese diplomat Sugihara during World War II 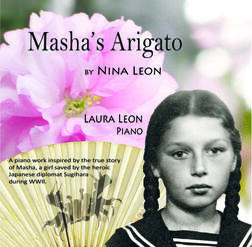 Masha's Arigato (Masha's Thank You) is a newly released recording by Laura Leon and is a tribute to Masha Leon from her three daughters. This piano work is also an expression of gratitude to Chuine Sugihara, the heroic WWII Japanese diplomat posted in Kaunas, Lithuania and the people of Japan.

Sugihara risked his career and issued 2,139 transit visas in 1940 and saved 6,000 Jews.
The work honors her beloved Yiddish culture and cherished time in Japan, interweaving her favorite folk song A Kleyn Meydele (A Little Girl) with Sakura, the traditional Japanese folk song that celebrates the beauty of cherry blossoms in springtime.
Masha was a Holocaust survivor born in Warsaw, Poland who became an internationally renowned columnist. She and her mother Zelda Bernstein received life-saving transit visas issued by Sugihara and found sancturary in Japan, arriving in Tsuruga in February 1941. Ten-year-old Masha learned to speak Japanese during her 6 months in Kobe.
Masha's Arigato was premiered on behalf of the family by Ms. Nobue Doda on November 3, 2020 at the reopening ceremony of the Port of Humanity Tsuruga Museum in Tsuruga, Japan.

On December 8, 2020, Laura's CD recording of Masha's Arigato received its premiere broadcast during the opening online ceremony for the Embassy of Japan in Canada's December 8-12, 2020 "'Visas for Life' and the bond of humanity: Sugihara Chiune's courageous humaniarian act" international online event.

To listen to Masha's Arigato, please click the link at the top of this page.
For information on purchasing the CD, kindly email Musicaltapestries@gmail.com