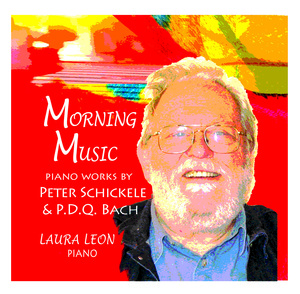 In a world of streaming music, it is great to know that listeners are still reaching for CDs. Musical Tapestries Inc. is delighted to announce that Morning Music: Piano Works by Peter Schickele and P.D.Q. Bach is on CDBaby’s list of top selling classical CDs.

Recorded by pianist Laura Leon, this unique collection of never before recorded piano works by the remarkable Peter Schickele and the one and only P.D.Q. Bach ranges from the composer’s stunning settings of American folk songs and hymns, a “snap shot” of a classical style Sonatina, to tangos, blues and a cool riff- a nod to pop and early Beatles.

All of these works-and many more-are brought to the contemporary classical arena by Mr. Schickele with finesse and sensitivity.

Peter Schickele, a five-time Grammy award-winning composer, will be celebrating his 80th birthday this year, along with Professor Schickele’s 50th anniversary of his P.D.Q. Bach “discovery.” Mr. Schickele's more than 100 works span orchestral, choral, chamber, movie and television scores-including Maurice Sendak’s children’s classic “Where the While Things Are” and arranged segments for Disney’s “Fantasia 2000.”

Morning Music was produced and recorded by Grammy award-winning classical producer Adam Abeshouse and received an award from the Classical Recording Foundation. Laura gave a pre-CD release performance at the CRF’s Weill Recital Hall Gala at Carnegie Hall, during which Peter Schickele received its Composer of the Year award presented by John Schaeffer, host of WNYC's Soundcheck and New Sounds.

Peter Schickele and P.D.Q. Bach changed the world’s musical landscape and continue to enlighten it for musicians and music lovers!